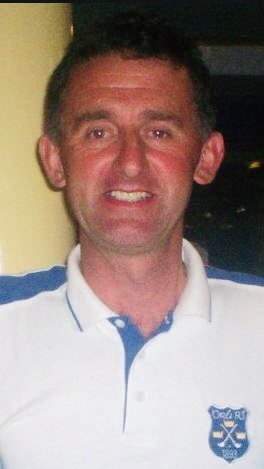 Published: over 3 years ago

All in Bruree GAA are saddened today with the news that John Lyons passed away yesterday. Our thoughts and prayers are with Sinead & Eva, all John’s family and large circle of friends at this very sad time and to whom we extend our deepest sympathy. We have lost a loyal Bruree GAA man but more importantly we have lost a friend, a dedicated family man, a community man, a great neighbour, a gentleman !!

Only last March John proudly received our clubs Hall of Fame award.
“The Hall of Fame award goes to a man whose love of Gaelic games was generated from an early age and was nourished in the fields around Knockaunavodig with his family, neighbours and friends. And this is where it continued for a few years until he was asked to try out for Bruree. He never looked back! A natural he went on to be a leading member of Bruree’s county final teams of 1978 and 1982. He was noted as a rangy and skilful hurler in his heydays with Bruree. Though he started his career in the forwards he usually played at wing or corner back where he was a diligent, sticky player and became an expert on the art of holding a man 😊 You would think he had enough of county finals, but no he came out of retirement to play his part in the 1994 county final as well. He is one of the very few that can claim to be involved in all three of those finals from a playing point of view. Continuing the county final theme, in 2006 he was a selector on the team that won the county. Something you hear quiet a lot about that team is the positivity and the willingness to support and work for one another. This man epitomises everything I just mentioned. A quiet man who never shouts and never has a bad word to say. He is always positive and encouraging of the players on his watch.
When he retired from hurling, he always stayed involved with the club as an able administrator and rolled up his sleeves whenever help was needed. He was also involved in girl’s underage football even though his own football career didn’t last too long, a knee injury forcing him to focus on his hurling.
A staunch Bruree man whether as a player, supporter, sponsor or administrator, his own innate modesty would not allow him to admit to the important part he plays in our club but Bruree GAA is very happy and proud to recognise and pay tribute to his role through many years”